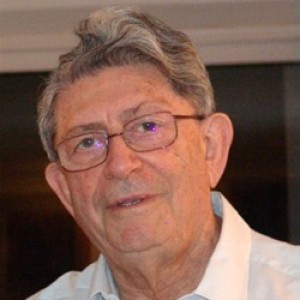 I was born in Będzin in the Zaglembia area in 1928 to my parents David Liwer and Miriam Liwer – Kaminer. My family was orthodox and belonged to the big Gur Hasidic community. They were first generation survivors affected by the Zionism and socialism 'germ' in the atmosphere of which I grew up. I attended the 'Mizrachi' school as a child.

When the world war broke out on 1 September 1939 I was sent far away from the German border to the county town of Kielce. I returned to Będzin a month later. The Germans burnt the synagogue with the 65 Jews in it when they came to the city. Then decrees were issued for the Jews in the city and we were ordered to wear the Blue Star of David on a white hand band on our sleeve, which was later replaced by the Yellow Star. Under these decrees schools and libraries were closed and all cultural activities were banned. Despite these, youth movements were active underground. I belonged to the Gordonia movement, which was a Zionist-Socialist group that taught us about Eretz Israel and educated us to love it.

My father, David Liwer, was one of the underground leaders in Będzin. Under his influence I took part in the underground activity despite my young age, for which the Israeli government gave me the "Badge of Fighter against the Nazis."

On 12 August 1942 the Nazis took all the Będzin Jews to a yard in Kamionka, where selection began. My family and I were lucky and we remained in Będzin.

The Germans began to build the ghettoes of Srodula and Kamionka, where all the Będzin Jews were put within two months.

On 22 June 1943 another deportation took place at the end of which, again, I remained in Będzin with my parents.

Two months later, in August 1943, the Germans began an all out deportation and total annihilation of the Będzin Jewry. My parents and I hid in an underground bunker for a whole week and were caught by the Germans when we ran out of food and water. We were sent to Kamionka, where all Jews caught were gathered to be sent to Auschwitz for annihilation. My mother's and my resourcefulness enabled the three of us to sneak to the ghetto's labor camp. In that camp we established a connection with a group of friends who hid on the Arien side. They helped my parents and me to flee from the camp in December 1943 and hide on the Arien side. We knew with certainty that if we were discovered by the Germans we were going to killed on the spot and, therefore, looked for ways to escape from Poland. We found an escape route to Slovakia and started our escape in January 1944. We left Korvilov, at the feet of the Beskidy Mountains on our way to Slovakia. Crossing the border demanded that we climb a 1,500 meters high mountain slope in the dark, terrible cold and deep snow. We were met by Slovakian smugglers who took us to the city of Liptovski Mikulas, where a Zionist movement was still active. We sneaked through the border to Hungary and got to Budapest at the end of that month.

The Germans invaded Hungary on 19 March 1944 and we fled immediately to București in Romania. I must specify that my parents and I were together the whole time. In that city we turned to the "Eretz Israel Office" that was active in getting Aliya certificates to Israel. My father managed to establish a direct contact with the representative of the Jewish Agency in Turkey and convinced him to give immediate emigration certificates to all survivors coming from Poland.

In July we sailed the 'Kazbek" from the Constanţa harbor in Romania to Istanbul, where escorted by English soldiers, on a freight train, we were on our way to Eretz Israel. We crossed the whole of Turkey, Syrian and Lebanon all the way to Haifa. From there buses took us to the Immigrants' Camp in Atlit. The half year |Odyssey ended our troubles on 17 July 1944.


A new chapter had begun in our lives, the one of absorption and settling in Eretz Israel.

where I joined the Hagana.

kibbutz. There I escorted convoys going to Jerusalem, fights in the Old City

and repelling Arab attacks on the kibbutz.

1974 - Graduate of the Managers' Advancement Program of the Tel Aviv university.

As of 17 September 2014 – Chairperson of the Zaglembia Organization in Israel.

Married to Hanka Sholowitch, who is a survivor as well. Father to Shmuel, Yael and Ran and grandfather to Idan, Omri, Noam and Nadav.