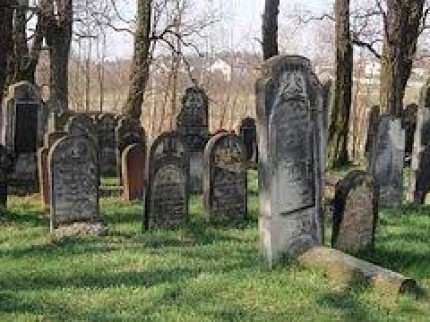 By Jeffrey K.Cymbler
Jews started to live in Będzin as early as the 13th century. Two hundred years later the first synagogue and cemetery were built in the center of town, on Zawale Street. This cemetery served the city Jews and many of the neighboring towns up to 1831.
The church required every Jewish burial in the Jewish cemetery to be paid for. This tax was in effect from 1588. In 1687 the entire community was accused of embezzlement by the local priest, Jan Katolzci, because it, illegelly, allowed Jews from Bytom to be buried in Będzin without paying the tax. The priest was assisted by a Jewish woman who testified to this felony taking place. The legal procedure lasted eight years, at the end of which the bishop from Cracow ruled that the Jewish community in Będzin collaborated with the Bytom Jewish community in order to embezzle church money. Therefore, the Będzin Jewish community was ordered to pay the unpaid burial taxes.
At the turn of the 20th century the cemetery on Zawale Street needed immediate renovation. The city council found the cemetery discordant with the city appearance. The mayor met with the Jewish community leaders to find a solution. The anti-Semitic press called for its complete destruction, despite of which the cemetery survived until the Second World War. The Nazis destroyed it, leaving not a trace. It serves today as a small, insignificant public park in the center of Będzin.
In the summer of 1831 the city of Będzin was affected by a plague of cholera and many Jews died as a result. In addition, many Jews died in battle during the Polish uprising against the Russian Czar and thus, more than a hundred Jews in the area died within a short period o a few weeks. The small cemetery on Zawale Street could not answer these burial needs and the Jewish community had to build a new cemetery very quickly. At the price of 300 Gilder and an annual payment of 20 Gilder, the Jewish community bought a lot of land at the feet of hill with its 14th century castle built by King Cazimir the Great. The new cemetery on Podzamczu – meaning in Polish: 'at the feet of the castle' – served the Zaglembie communities until the second half of the 19th century. Many of the gravestones there are decorated with the Polish emblem of the eagle respecting the Jewish men who fought side by side with the Polish fighters in the two rebellions against the rule of the Russian Czar in 1831 and 1863. A few hundred such gravestones can be found in that cemetery today. A few hundreds more were covered by dirt when the Nazis dug a tunnel in the hill. The city of Będzin and the Zaglembi survivors' Organization are renovating and cleaning the old gravestones. In 2006 the Organization erected a new iron gate to the cemetery but, unfortunately, hooligans have lately pulled some of it apart.
A third Jewish cemetery in Będzin was built in the second half of the 19th century on Sieleckiej Street, which served the Będzin and Czeladź communities up to the First World War. A stone and lime company with the Altes Quarry used the gravestones perversely. The desecration of gravestones of those passing away between 1916 and 1943 went on under Nazi rule as well. The destruction of the cemetery was put to a halt on 23 March 1945 after the Jewish community leaders intervened. This prohibition was validated by the region council on 2 August 1945. The company appealed before the Office for Public Safety and the Central Committee of Polish Jews. The latter determined that lime could be dug from under the cemetery under the condition that the cemetery be moved to a new location. The production of lime that cause the destruction of gravestones was supported by the "Building workers association on the commercial department of Będzin" by a decree taken on December 1945. It is more than likely that the extraction of lime stone was not stopped up to July 1946 despite the decree to stop it issued by the Government Office for Public Safety issued in May of that year, after the intervention of the Supreme Religious Council of the Polish Jews and Jewish Religious representatives.
The cemetery on Schelska Street was nationalized by the Polish Government during the 1950s, was completely destroyed in the beginning of the 1960s and covered by layers of cement. It serves today as a parking lot and bus station. There is no sign even mentioning the fact that the place covers an ancient Jewish cemetery.
The fourth and last cemetery was built by the Będzin Jewish community in the Czeladź precinct.
(1) There are plans to publish a book about this historical cemetery under the auspices and funding of the local Zaglembie Museum in Będzin.
[2] Jaworski, Wojciech, " Jewish Religious Communities in Upper Silesia 1945- 1970, " in
Marcin Wodziński and Janusz Spyra, Jews in Silesia. ( Cracow: Księgarnia Akademicka, 2001) , p. 259. This specifies the two sources the writer bases his fact on.