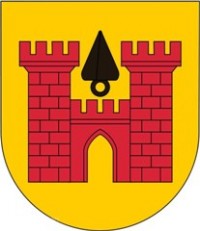 Olkusz is a city-district in south Poland in the Little Poland County. There are (2004) 37,500 people living there. It is situated on the main junction leading to Upper Silesia, Zaglembie and Kielce.

2,500 Jews lived in the city between the two world wars – a quarter of its population. They made their living through industry, crafts and commerce and established many self help facilities. The city enjoyed a lively Zionist and pioneers' activity along political and educational activity of Agudat Yisrael. In 1926 eight of the 24 city council members were Jews, one of whom was elected major deputy.
The Germans captured the city in September 1939. A few, mainly young, Jews fled to the east to the area under Soviet control. Once under occupation, persecution of Jews began along with looting and recruitment to forced labor. Jews were forbidden to walk on the main roads, ordered to wear white bands on their sleeves with a blue Star of David, which was later replaced by a yellow patch in the shape of a Star of David to be worn on the front and back. Jewish businesses and private homes were confiscated and they were ordered to pay the Germans high sums in silver and gold.
In the fall of 1939 a Judenrat was established in the city and by November it founded a communal kitchen to serve meals to needy Jews.
A central Judenrat – the Centrala - was established in Sosnowiec by 1940 for the eastern Upper Silesia Jews. The Judenrat of Olkusz was placed under its subordination. It seems its members had been replaced. A Jew from the city, called Sobol, was elected representative to the Centrala in Olkusz and was possibly appointed chair of the local Judenrat.