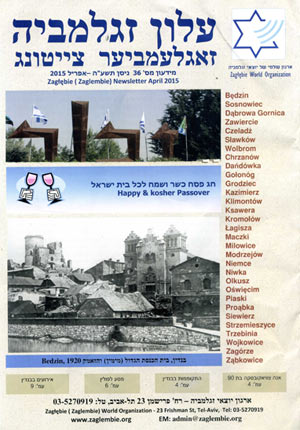 The first issue of the Zaglembie survivors' Organization in Israel was published in December of 1997. In Yidish: "זאגלעמביער צייטונג" after the original newspaper that was published in Zaglembie between the two World Wars.
Rick Feldman with the help of Jeff Cymbler learned that the editor of this newspaper was Leon Szpiegelman and it was published at Będzin, Kołłątaja 34.

See at the end of this page: Newspaper from year 1922, link to newspaper from 1939, a photograph of the house where the newspaper offices were, document showing that Leon Szpiegelman was the editor.

The bulletin replaced the letters and information circular that had been circulated until then among the Zaglembie survivors registered as members. Since then the bulletin appears twice annually: before Rosh Hashana and before Pessach.
The bulletin has articles dealing with the glorious past of the Zaglembie communities and their whereabouts during the holocaust, memoirs and personal stories of the organization members and current information regarding activities and connections with various institutions worldwide.
All is published in Hebrew, Polish, English and Yiddish. The editorial board is run by first and second generation activists:

Dear members, if you have an interesting story and pictures you'd like to have published in the upcoming journal, please send them to Rachel Bebes or Itzik Opler's email .

The Newsletter No. 37 – Sept 2015 mentioned by mistake different person as the manager of the Foundation for the Preservation of Jewish Heritage in Poland (FODZ). The CEO of FODZ is Ms. Monika Krawczyk. 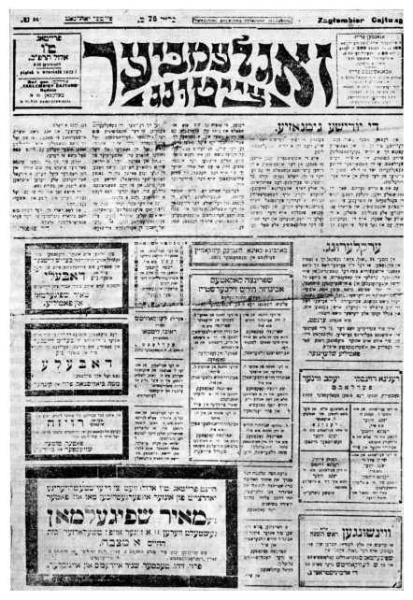 
The house where the newspaper offices were: Będzin, Kołłątaja 34


Document showing that Leon Szpiegelman was the editor