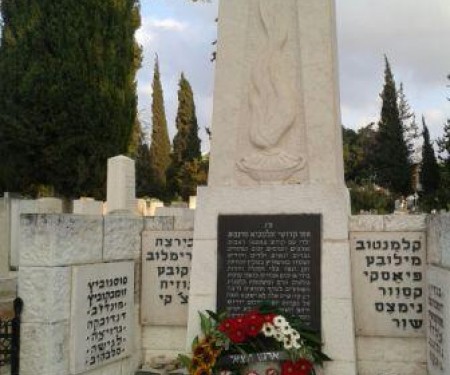 The ceremony  tםםk place in Cemetery Nachlat Itzhak in Tel Aviv on 26-7-2015.

Following is the Chairperson's speech:

The month of Av is a month of national disasters in the Jewish tradition:

1. The Hebrews, who walked the desert for forty years, were decreed not to enter their promised land, because they sinned against the spies.
2. Destruction of the first temple.
3. Destruction of the second temple.
4. The city of Beitar was conquered by the Romans.
5. Jerusalem was plowed flat by the Romans.
6. The Jews in England were deported by King Edward.
7. The Spanish deportation of Jews- Alhambra Decree - ended in 1942.
8. The total annihilation of the Zaglembie ghetto and in all other cities in Poland, 1943.

There was no coincidence in the Germans' choice of the month of Av for the total annihilation of the Zaglembie Jewry, both physically and spiritually. Nothing in the history of the 20th century and onwards even closely resembles the intensity and depth of the Holocaust. For every Jew, wherever they are, there is a deep scar scorched to their skin that will never heal. We all carry it even today in free Israel.
We are remnants, survivors of a community, who annually stand at a memorial service in the Nahalat Itzhak cemetery on the Ninth of Av, where in 1952 our parents buried ashes of Zaglembie Jews massacred in Auschwitz. It was one of the first monuments to commemorate the Holocaust in Israel.

At our gathering there annually, we make sure that such a ceremony takes place and we fulfill our role in the chain of memory reminding all that the Holocaust did happen to the Jewish people, especially now that generations change. Therefore, it is essential that the new generations are brought to these memorial services.

Never again. We will forever remember what our bitter enemy has done.