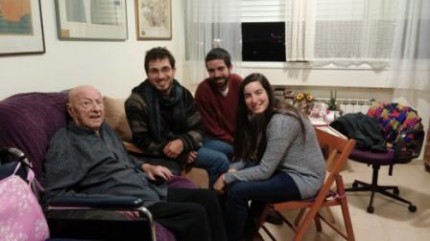 Reuben Aloni was born in 1925 and raised in Sosnowiec. During the war he joined the army of General Andres, who gathered a fighting force to fight the Germans in Northern Africa. He made Aliya illegally in 1942 and settled in Tel Aviv, where he has lived ever since. He has 8 grandchildren.

He served in the 154 unit that activates agents. He served in the IDF for many years and reached a high position in the Mosad – The Israeli security agency – where, as part of his duty, he took part in many operations both in Israel and abroad.
We were happy to take part in this project and meet such a great man. We, third generation Zaglembie members, believe it is important to connect between the Zaglembie generations and pass on its heritage.