Commemoration at the Zaglembie Sacred Memorial in Modi'in An impressive memorial site, a few acres big, "Forest of the Zaglembie Sacred" in the area of the city of Modi'in , is where thousands of Zaglembie Survivor Jews gather on the Holocaust Memorial Day.
It is a forest, in the middle of the Ben Shemen Forest, serving as Memorial and yahrzeit candle for thr Zaglembie community that was eradicated during the Second World War. "Remember "("Izkor") is carved on a stone plaque above the commemorating stones.
KKL is committed to planting "six million trees" through the Plat the Planet UNEP project, in memory of the Six Million Jews slaughtered during WWII. KKL has decided to plant these trees over the next ten years, as understood from the UN Nairobi declaration that states the planting of a billion trees worldwide in the fight against global warming. The founder of the project, 2004 Noble Peace Prize, Ms. Prof. Wangari Muta Maathai[1] , calls for the fight against global warming. 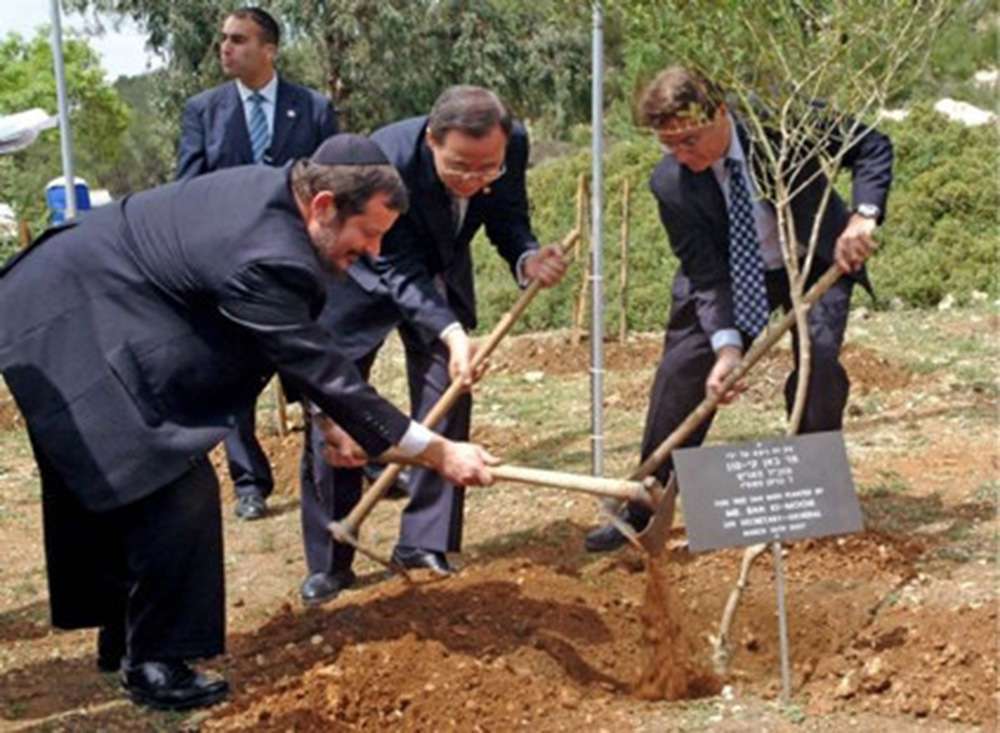 The first to plant in memory of the Holocaust Survivors was Secretary-General of the United Nations, Ban Ki-Moon, during his last visit to Israel. In the planting certificate the first paragraph strengthens the contribution of that planted tree to the lowering of global warming. Every planted tree absorbs about a ton and a half of CO2 from the atmosphere, in the course of its life. Thus, planting an addition six million trees helps absorbing 2.86 additional tons of CO2 from the atmosphere.

[1] Wangari Muta Maathai (1 April 1940 – 25 September 2011) was a Kenyan environmental and political activist, educated in the United States at Mount St. Scholastica (Benedictine College) and the University of Pittsburgh, as well as the University of Nairobi in Kenya.
In 1977, Maathai founded the Green Belt Movement, an environmental non-governmental organization focused on the planting of trees, environmental conservation, and women's rights. In 1984, she was awarded the Right Livelihood Award, and in 2004, she became the first African woman to receive the Nobel Peace Prize for "her contribution to sustainable development, democracy and peace". Maathai was an elected member of Parliament and served as assistant minister for Environment and Natural Resources in the government of President Mwai Kibaki between January 2003 and November 2005. She was an Honorary Councillor of the World Future Council. In 2011, Maathai died of complications from ovarian cancer.