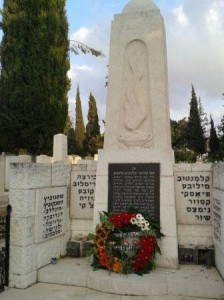 The Ashes' tombstone that was built in Israel in 1953 in the Nahalat Yitchak cemetery in Tel Aviv where people get together on Tisha B'Av to say Kadish to remember the day the Zaglembie Ghettoes were annihilated.
In 1951 the Zaglembie Survivors' Organization in Tel Aviv, received a small wrapped up little parcel with ashes of Zaglembie Jews murdered in Auschwitz. A miraculously saved Jew from Sosnowiec, David Ziecer brought it to them. He was worked as a prisoner by the crematorium of the camp, where Jews were cremated. He scratched the crematorium collecting a handful of ashes from the last transport of Jews from Zaglembie in 1943, among them his wife and children who choked to death and were burnt in the crematorium.