The Jewish cemetery in Czeladź 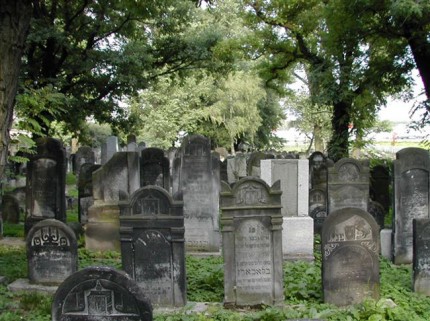 By Jeffrey K.Cymbler
Near the outbreak of the First World War, the Jewish community grew to such an extent that there was a need for another local cemetery. The one in Będzin was no longer sufficient. Therefore, in 1915 the Czeladź cemetery was built half way between Będzin and the city of Czeladź, surrounded by many agricultural farms, thus serving both communities. It is now near 64 Będzińska Street with its Eastern wall bordering with a parking lot of the biggest mall center company in Poland.
It was built by the two Jewish communities of Czeladź and Będzin according to the Jewish Halacha according to which men were buried on the right and women on the left of the cemetery. There is a path in the center marking the different lots of about ninety on every side. In the center of the cemetery is a clearing open to both sides of the path. This marks the division into the Czeladź and the Będzin sections, where the former citizens were buried in the front part of the cemetery closer to the city of Czeladź and the latter were buried in the area closer to Będzin. Children from both communities were buried in the back with small gravestones marking their graves. Unfortunately, it seems that most of their headstones were desecrated.
The cemetery was narrower at the turn of the 20th century than it is today. Investigating the issue it turns out that most burials taking place in the mid-1930s were conducted on the open spaces open to both sides of the cemetery as it was already full. That made the cemetery get wider, namely, burial lots were added to existing rows but no new rows were arranged. It is of interest to note that many buried in the cemetery came from other cities than the original two. Surveying the headstones sheds light on the wide social range of the Jewish Polish society that lived and died in the Będzin area at the turn of the 20th century and between the two world wars.
On 10 September 1939 the Germans hanged two Jewish bakers Katz and Stavsky under the pretext of raising the price of bread. Katz's gravestone can be found in that cemetery. The Nazis killed Schraga Feibel Paztazci, the cemetery gravedigger, on 14 October 1939. His daughter was killed by Nazis at the Będzin hospital two weeks earlier, on 1 October. In his memory, a headstone was erected after the Holocaust.
There are a few headstones to found there of Jews who were killed when the Nazis set fire to the Będzin synagogue on the night of 8-9 September 1939. During Nazi occupation, many Jews were buried there. Not all of them had the ability to place head stone son their final burial place. None the less, some were built during the war. The harsher the Nazi limitations grew the deeper the effect was on the headstones' size and quality of material. They became smaller and cheaper. The limitations issued by the Nazis can be found on the headstones themselves.
In August 1943 the Nazis began to liquidate the Będzin ghetto and all Jews left in the city were transported to Auschwitz. Hundreds of them were murdered during the last roundup of Jews from Będzin for transport to death camps and their bodies were thrown into a ditch. To the right side of the back of the cemetery is a mass grave with the remains of about 400 Jews who were shot to death in the Kamionka ghetto in Będzin in August1943.
A new Jewish community started in post war Będzin and Czeladź. There were still pogroms in many cities in Poland after the war as well. On 17 August 1945 two Czeladź Jews were killed, 21 year old Marian Grossman and 32 year old Shlomeck Gelbard and were buried in the local Jewish cemetery. Both headstones state that they died as a result of a "disaster". The last headstone in the cemetery belongs to David Schebak who died on 8 May 1948. That year, the Jewish community disintegrated as post war Jews in Będzin all emigrated from Poland.
When I arrived on a visit for the first time in 1986, the cemetery was in ruin. It was difficult to walk on the premises as not only were there broken headstones but many graves were actually open holes into which I stumbled. The vegetation had grown wild and the cemetery was broken open without a gate or fences.
Monik Stavsky, a Holocaust survivor, funded the renovation of the Jewish Cemetery in Czeladź in 1988. All headstones left were placed properly supported by cement bases. Unfortunately, in some cases the cement base covered the original writing that cannot be deciphered any more. In other cases pieces of the same headstone were scattered in different places in the cemetery. Despite the fact that there is a wall around the cemetery and there is a gate vandalism hasn't stopped. On 1 September 2002, 70 headstones were destroyed and desecrated with anti Semitic, Nazi inscriptions. Police investigation was terminated in 2004 with the guilty party still on the loose. Vandalism is still rampant these days. A few headstones were pulled down and broke after the catalogue of the cemetery had come out. Therefore, it can serve as documentary of the Czeladź Cemetery to date, some 60 years after the Holocaust.

The entire article can be read in Jeffrey K.Cymbler's book: The Jewish Cemetery of the Będzin and Czeladź Jewish communities in Poland.
The complete map and index of graves can be found there. The book had introductions in Hebrew, English and Polish. The book can be bought online through the Jarden book store in Cracaw: www.jarden.pl
• One can get the keys to the cemetery from the family living on the ground floor of the building next to the gates of the cemetery.
• There are headstones of people outside the region and the English version specifies the Polish names of the cities they had come from. 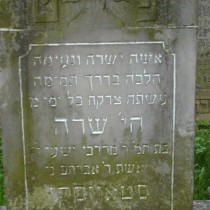 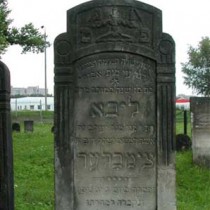 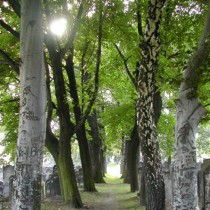